I’m Michelle Doolan. I’m a civil engineer currently based at Melbourne Metro Rail Authority in the station’s team working on the Parkville Station. As part of my work as an engineer at Aurecon I’ve been involved in the Melbourne Metro Rail Project both on the consulting side and the client side. And that’s been anything from sustainability to requirements and standards to stakeholder consultation - so quite diverse. And then the other big project I worked on is the Furlong Main Heatherdale and Blackburne level crossing removals. I think going forward into the future there’s a lot of exciting changes that could happen with rail. We’re already looking at high capacity metro trains where we can take more people and more trains per hour on our networks. Further afield than that there’s possibilities to manage rail via a cloud network where it’s all done remotely where going forward it could be driverless trains for example. I chose to join Aurecon a few years actually prior to finishing university. And I saw how many places Aurecon worked and at the time I had a big thing for Africa. And I really wanted to be able to work across different countries and across different projects. So, when I was looking at all the different consultancies where they were based, the markets they were based across and the type of engineers they had it really struck me as a place I wanted to work. I think the great thing about the Aurecon Attributes is that they encourage you to look outside purely your field of engineering and see what other talents you may have to supplement your work and how you can think beyond a typical scope say as an engineer. So, for me I feel there’s a few that I could relate to but I guess my recent award I received at Ausrail prompted me to really see that I would opt more to be an unconventional thinker particularly as someone who’s done an arts engineering degree. So, the presentation which I brought to Ausrail was in the context of community consultation but to implement virtual reality to basically engage the community along the construction phases of major projects. So instead of looking at construction as a nuisance with all the major projects going on they could see it as something exciting and something really interesting and show people how cool engineering is for lack of a better term. I like the people I work with. I like my team. The rail team feels, I don’t know, kind of like a second family in a way. We all get along really well. I like the diversity of projects I worked on. I loved the fact that the people I worked with had allowed me to jump from one thing to the next because I don’t sit still very well. And I do feel like everyone at Aurecon has accommodated me so far in what I want to do. Read more at https://goo.gl/5VnZNf. 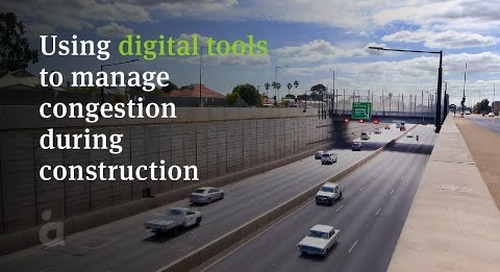 Aurecon is using digital tools to manage congestion on one of Adelaide’s busiest roads during the construct...

Stay safe…Why? Because people depend on you

At Aurecon health and safety is incredibly important to us because people depend on us. Partners, children,...